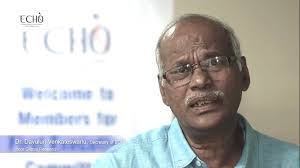 Davuluri Venkateswarlu: the battle of a lifetime

For more than two decades Dr Davuluri Venkateswarlu, General Secretary of ECHO and Director of Glocal Research and Consultancy Services, has been working on deep-rooted socioeconomic problems like child labor and minimum wages in seed industry. Enabling the seed industry to take concrete steps to strengthen their seed supply chain in terms of decent work standards. Davuluri is a member of the Advisory Board of RHSF. We are honored to share with you this interview:

What is the situation of child labour in India today?

There is an undeniable improvement in the area I focus on: agriculture and the related seed industry. Between 2015 and 2019, studies indicated that the rate of child labour had fallen from 16% to 10% in the overall industry. This result must nonetheless be nuanced, since the phenomenon varies from one crop to another and mainly depends on the proactive prevention actions of companies. When measures to address the issue are implemented, the rate can fall down to 5%! This is extremely encouraging even though there is still a lot to be done.

In the hybrid seed industry for example, children are still preferred to adults due to the activity itself. Emasculation and pollination are done manually and require preciseness, delicacy which can only be obtained by children’s fingers.

Is poverty the main cause of this situation?

Poverty definitely belongs to the main causes of this situation, but it would be false to consider it is the only one. In the early 1970’s, the hybrid seed production entered the Indian market. For their agility, children were frequently hired but this trend remained on a small scale. In the 1990’s, India opened its market to multinational companies which rapidly settled to benefit from the availability, the low price of labour force as well as optimum soil and climate. This is when child labour became endemic. The financial background of the family obviously played a key role, but so did the increase of demand and the pressure to minimize the cost of production. Children are less expensive and more productive than adults. In 1995, children kept dropping out of school to go working in the seed industry.

Not only is poverty one cause among others, but it is often used as a justification. Claiming that entire families depend on the work of children is both false and dishonest. If child labour continues, children are prevented from going to school and thus cannot emancipate themselves from poverty. It’s a vicious circle.

Child labour is not the consequence of poverty, but the concentration of a very complex societal issue. We realised during our researches that it was intermingled with another problem, that of minimal wages. Nowadays everyone agrees upon the necessity to end child labour. The question of minimum wages has to receive the same attention. There is still a 40% gap between the minimum wages and the actual wages. This situation is incredible. Companies and States have to show their commitment and take concrete measures on the field, at every level of the supply chain. This would definitely benefit everyone – starting with kids.

Davuluri, you have such an in-depth understanding of the issue, how did you manage to establish a break-through in the way to deal with child labour?

I knew the situation before starting my research because I worked as a child. My family owned a small land and I was a labourer for my parents and for a nearby farm. Yet, determined, I managed to overcome all challenges and completed a Master Degree in Political Science in 1984 and a PhD a few years later.

My commitment comes from a collaboration with my professor, who was an activist and a specialist of child labour in India. She asked me to go on the field to study what was happening and report my findings. I began by focusing on farmers, children and people and later paid attention to the linkages. In other words, I looked at all dimensions of the issue, and demonstrated the chain of impacts on the ground.

I soon realised that the issue of child labour was related to the economy of price. In other words, there was a huge gap between the wages and the prices. In 1999, I decided to write a small monograph book – called “Seeds of bondage” – in local languages to help the activists. My professor decided to have it translated in English in 2000. This new edition had a great echo and caught the attention of English medias to such a point that global companies and western activists started to address the issue. And, soon investors started to put pressure on multinationals to monitor employment of children too. I wasn’t expecting my report would have an international impact.

How did you turn awareness into tangible actions?

The publication of my book “Seeds of bondage” in 2000 triggered an international alertness that helped implementing the involvement against child labour. I met Martine Combemale in 2004 when she was auditing farms and we published a report together. It was then clear for us that the issue of child labour was part of a bigger problem. This multi-stakeholder collaboration was the only way forward for us. In 2005, the CCF – Child Care Project – was created in order to reach an agreement between companies, NGOs and researches. During a first forum, they started to dialogue and implemented an action plan.

Another forum took place in 2015 to tackle the issues that had been left aside in 2005, such as the necessity to guarantee minimum wages for the workers. Renamed to reflect the new objectives, ECHO* is now composed of 16 companies, four NOGs and two activists. Since 2015, regular updates and reports have been published.

All in all, I think Martine and I fully agree that fighting against child labour stands in three words: refuse, understand, act and that sustainable improvements can only be found through dialogue and cooperation.

What an incredible trajectory, Davuluri! Would you mind telling us about your childhood?

I was born in South India. I’m the youngest of a family of 11 kids. Only my brother and I had the chance to go to school. I used to share my time between schooling and my job in a farm. When I was 11, my family faced financial issues and I was compelled to stop going to school. I worked in the cotton seed industry and I looked after the cattle the rest of the time.

I finally told my parents I wished to go back to school. My mother agreed but my father refused. I fled his house in protest but came back three days later begging for food. My escape worried my parents and they allowed me to start studying again. In fact, they even sold the cattle so that I could continue getting an education. After missing one semester, I was among the top three of the class. My teacher was convinced I had talent and motivated me to keep going forward. I was granted a scholarship for both intermediate class and university.

Davuluri, tell us what’s your view on how the eradication of child labour could affect a family and the entire society?

I think it would have an impact on many levels. It is first of all synonym to better conditions of work for the whole society. If children do not work, there will be a shortage of labour and adults will be able to negotiate their wages. Secondly, it would turn the vicious circle of poverty into the virtuous circle of emancipation by enabling children to follow an education. Parents are always extremely proud when their children go to school and it’s essential to the well-being of the kids. When I worked in the fields, my clothes were in very bad shape but when I started going to school, my parents bought new clothes. Parents do not mind making sacrifices if it can help their children getting a brighter future. The Article 21A of the Indian Constitution guarantees a free and compulsory education up to the age of 14. This fundamental right has to become a reality.  When education becomes a priority, it will slowly become a norm.